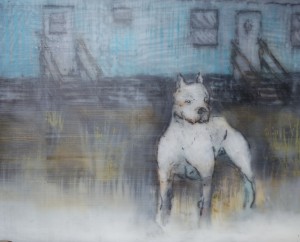 White Picket Fence: When driving on country roads in the south of USA, you pass run down trailer homes. These homes are on often narrow strips of land, lodged in between the road and the edge of a forest. I am curious about the people living here. You are basically in their yard and you see many material artifacts from their life, but you rarely see any people. The following is sort of a stream of consciousness, facts and opinionated thinking all jumbled together in a great mash:

Alabama was a slave state. One of the Confederate states in the Civil War. Alabama held captive many African-American slaves, working in the cotton fields. Whilst living in Alabama, the unrest in Ferguson, Missouri, erupted. Sparked by a white police officer shooting of a black man. July 10., 2015, the Confederate flag was taken down at the South Carolina Capitol grounds. The day after, I went for a drive – and I have never seen so many Confederate flags waving from trailer homes and bypassing pick-up trucks. The Confederate flag is said to be a symbol of Southern pride. Some say that waving the flag has nothing to do with racism. I think it is all very blurred and confusing. Donald Trump has deeply offended both Muslims, women, African-Americans and Mexican-Americans during his campaign. He is often referred to as a demagogue. According to the U.S. Census Bureau; Alabama is the state with the highest number of citizenships below the poverty line. Donald Trump won the Alabama primary. The “others” he speak of, are most often non-white. So when he says he will make America great again, he is speaking to a white male, with little schooling, someone who is struggling financially,who does not believe they can affect the government in any way, and who finds it appealing that his misery is someone else´s doing. Someone who finds it likely that “the others” poses some sort of threat to his happiness in life, and who think that it speaks in Trump´s favor that he was not hasty about denouncing the KKK. The demographics seem to put a lot of Trump´s voters in these trailer homes.

At the same time, I know that it is not all black or white (pun a little bit intended). All sorts of people live in trailer homes, with all sorts of opinions and values – and all sorts of skin color. But still, my bias is leaning towards that the majority are white and poor, with a hint of inherited racism sprinkled on top. I also have a preconceived idea about how seriously they take the Second Amendment. Therefore, I do not dare to knock on any doors. And what would I say? “Hey, I am curious about me thinking you are a racist redneck holds any water. Can we talk about it? I have brought coffee.” Actually, what really sparked my interest, and made me want to work with a series like White Picket Fence, was that I noticed something different outside a trailer one day. For almost six months I had been driving passed the same trailer, and everything looked the same. Nothing looked taken care of, and there were no signs of life being lived. An old woman could sometimes be seen sitting outside on a weathered plastic chair. No table next to it. Then one day: a band of multicolored Christmas lights was decorating the trailer! A sign of activity beyond just existing! It sparked my interest. I would have loved to have coffee with that old woman. To sit down and learn about her life, her hopes, her fears.

When driving in Alabama, country music is playing from most of the radio channels.
Songs about being lonely, songs about picking up women in bars – and also the dreams about the “white picket fence”; “The American Dream”. It plays right into Trumps slogan “Make America Great Again!”. He says to people: “You can have it all!. You deserve it. You should have the white picket fence and the wrap around porch. Heck. You should also have the swing!” And that is what I have painted. The impressions you get when driving by, in combination with the dreams I imagine that the inhabitants have. A dream of a different dwelling, a white picket fence – and a better life.

My daughter and a rescue dog, a little pitbull-mix. 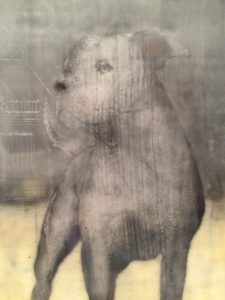 My fascination with pit bulls and pit bull mixed dogs, comes from the fact that they are banned in Norway, but are one of the most common dogs seen in Alabama. I am intimidated by them, but have met some wonderful full bred and mixed dogs. One of them picked up by friends, as a tiny pup, next to the road. My kids were in awe as to how fast the dog got BIG.

(Text written in the spring of 2016, while Obama was still in power.) 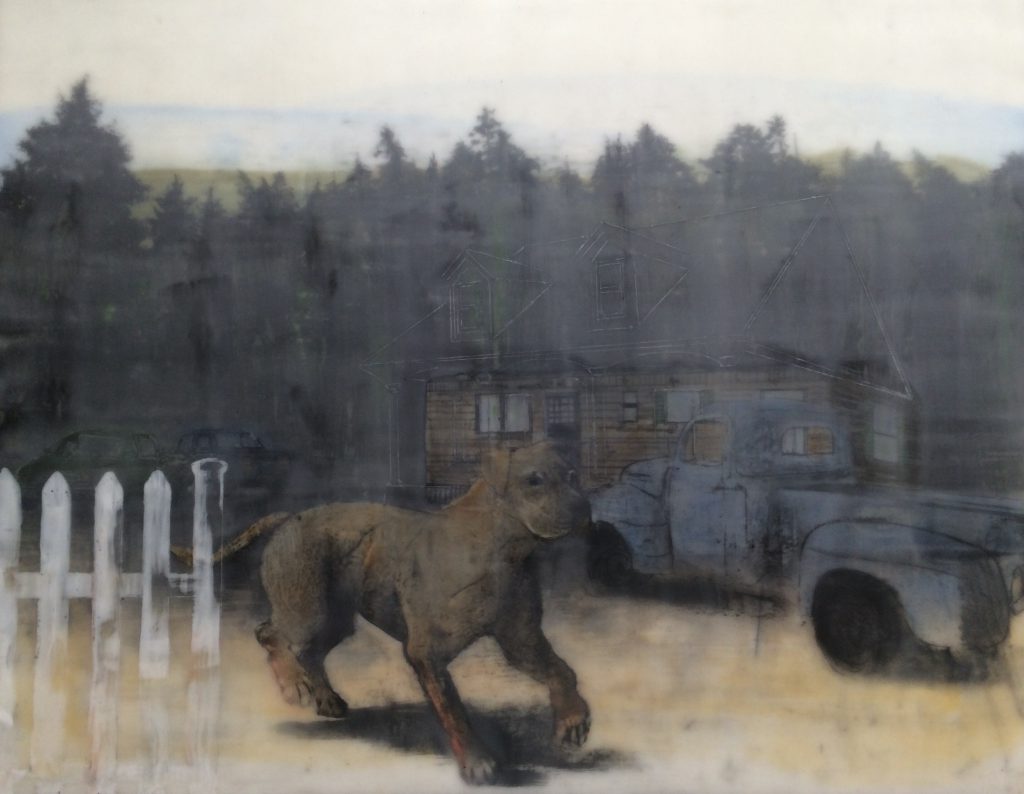